An Eventful and Expensive Monday 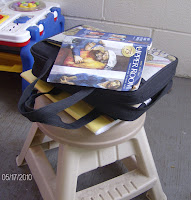 In the mornings I always sit on the screened porch in front of our house and watch the kids until they catch the bus. Monday at 6:40 a.m. I was sitting there as usual, calmly reading my devotional book, when my oldest daughter came running back from the bus stop.

She was holding something in front of her with both hands, way out from her body, and the kid I call Crutches Boy was trailing her. (I call him Crutches Boy because he had a broken leg at the beginning of the school year, and I don’t know his actual name. He is not currently on crutches, however, so it’s a bit of a misnomer, I guess.)

I sighed and got up, slipping on my shoes to cross the yard and say, “Okay, what nasty thing are you bringing home NOW?” As you might guess from that statement, she has a history of bringing home nasty things. We won’t go into that now. (And I hope poor Crutches Boy didn’t think I meant him. Whoops.)

She said, all in a rush, “Mom, it’s a hurt kitten; I think it was hit by a car.” Crutches Boy bobbed and hovered behind her.

I could see that it was indeed a kitten. It had a little spot of blood on its nose, but it looked okay from the front other than that. I said, “What do you want me to do with it?”

“Take it to the vet or something!” she said.

I sighed and said, “Just put it down and go catch your bus.” I knew the middle school bus was due any minute. When she set the kitten down in front of the house I saw that from the back it was definitely not okay. Its poor little tail had been stripped somehow; it was nothing but bone and blood. It lay down on the porch and looked pitiful. Well, I couldn’t just LEAVE it there, could I? I went to get a towel or something to wrap it in.

I went into my younger daughters’ room --they were still sleeping-- and said, “Wake up girls! I need your help with something.” As might be expected, the response to THAT statement was unenthusiastic mumbling muffled by pillows. I added what I knew would get them moving.

“Your sister found a kitten.”

Two heads popped up and they both bounded from bed. I told them it was on the front porch and I followed them out with the towel. When we all came out the poor kitten was re-energized by fear and tried to run away. It was quickly caught and wrapped in the towel. We brought it inside, and I set the girls on the tasks of comforting it and seeing if it would take some milk from an eyedropper.

While that was going on, my cell phone started buzzing. There were two new messages. My oldest daughter was texting from the bus. “kitten?” and “wat happened” 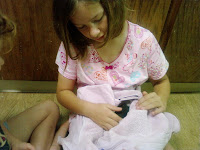 I texted back “kitty ok,” and took a picture of her sister holding it to send her.

My phone buzzed again. “can we keep it” she was asking. I answered that one with the classic “we’ll see.” Momspeak is good in text language too!

Then she texted me again. “it’s name is bunny” At the same time, her sister was saying, “We should call it Lucky!” I decided to table that discussion for later.

In the meantime, I was trying to look up a vet in the yellow pages. It looked like an animal hospital was in order, and I found one that was nearby. I also found a cardboard box left from last week’s trip to Costco to transport the kitten.

Once the kitten was in the box, I told the girls to get their clothes on and get ready to catch their bus. I went to get the twins up. I was already exhausted and it was only about 7:05 a.m.!

By the time my daughters boarded the bus to elementary school, I was in the car with the twins and the kitten in its box. I followed the bus out of the neighborhood and headed out.

Weirdly, the animal hospital was right next door to the “Hawaii Sperm Bank.” I didn’t know they were even really CALLED sperm banks! I thought that was just on TV or something; in real life shouldn’t they be called infertility clinics or something! That distracted me for a minute, but then the task of getting into the door of the animal hospital claimed all my attention.

Maneuvering an injured animal in a cardboard box, along with a double stroller that’s just a SMIDGE too wide for the average doorway takes a lot of concentration. After a while one of the ladies behind the desk took pity on me and came to help hold the door.

I explained why I was there and they called for a someone to come “assess” the kitten. They asked me, “Are you willing to adopt this animal as your own?” That seemed a little formal. Was I taking some sort of vow? I said okay.

A lady in scrubs came out and looked in the box. She said they would take a look at the kitten in the back and then come out and tell me what it needed.

Then the lady behind the desk gave me some forms to fill out “as best I could.” She asked me if we had a name for it. I said, “That’s under a bit of a dispute.” Personally, I thought Bunny was a stupid name for a cat. I mean, you don’t call your dog “Horsey,” you know?

I texted my daughter, since it was still before eight and I knew she’d keep her phone on until school started. “your sister wants to call it lucky,” I told her.

While I waited for the doctor to come speak to me several people came in with animals. One lady came in with a young Dalmatian that had a cone on its head. It really wanted to smell everything in the room, but its nose was just a little shorter than the cone, so it just kept clunking the edges of its cone into everything it wanted to sniff, making the sound a plastic cup hitting a table makes. The twins were pretty entertained by this, yelling, “Doggy!” periodically. Someone else had a little Yorkie and a baby in a carrier. The twins added an occasional yell of “Baby!” to the conversation.

Another lady came in with a bunny in her purse. There was discussion at the desk over this, because the rabbit specialist wasn’t in that day. (I’m like, There’s a bunny SPECIALIST? Aren‘t veterinarians supposed to be able to take a lizard/a chicken/a pig/a frog all in the same day, like Kramer said on Seinfeld? I feel so disillusioned!)

While that was going on, lady in scrubs came out and said, “Bunny?” Dalmatian Lady and I pointed at the purse on the desk. She looked in the purse and then said, “No, I mean the kitten NAMED Bunny.”

So I had to say, “Oh. That’s me.” You see! This is EXACTLY why I didn’t want to name the thing Bunny in the FIRST place! Now I look like a moron in front of the veterinarian.

She told me Bunny needed his tail amputated. (And that he was a he, by the way.) This seemed reasonable to me, until we discussed how much it would COST to amputate the tail! Animal surgery is just as complicated as people surgery apparently! But at this point, I felt like I was committed. Especially since I’d vowed I would adopt the animal for my own. So I said go ahead and do the blood work, and the x-rays, and the surgery, AND the overnight stay. 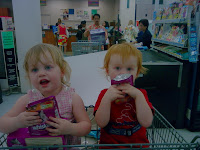 I also went to Wal-Mart and picked up a litterbox and food for when Bunny comes home. The expenses are mounting up already! (The twins thought the cat food might be for them.)

Like I told my husband later, once I picked up the injured kitten in a towel, I was pretty much stuck with footing the bill for him. But my husband suggested the name “Stumpy” or “Money Pit” might be more appropriate than “Bunny.” We’ll see… 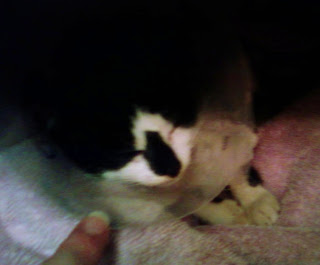 Okay, so here's Bunny, groggy from surgery and wearing a cone on his poor little head. I hope other cats don't have internet access to see this or he will be SO embarrassed! But seriously, how could I have resisted this face!
Posted by Christie at 7:36 PM