I was spending a pleasant Saturday afternoon with the kids.

Truthfully I was trying to keep the twins entertained in the living room and ignoring the noises coming from the big kids, who were all upstairs.


(image from http://brandontoddwright.blogspot.com)
After a while things got quiet upstairs, and the twins were settling down to watch a movie with me on the couch. That's when ET appeared with an announcement.

"Boo's underwear is in the neighbor's tree."

So the peace was shattered with a bunch of confused questions.

"Which neighbor? Which tree?"

"Why are you telling me this?"

And most important: "WHY is your sister's underwear in a TREE?!"

Apparently Boo was angry that ET and GG weren't letting her in the room with them. So in retaliation, she began shoving various pairs of her underwear under the locked door.

And GG retaliated in turn by throwing all the underwear off the balcony and into the front yard. (And the neighbor's front yard, apparently.)

Obviously Boo didn't really think this one through....

So Boo had retreived all the underwear from the yards, but one pair was still stuck in the neighbor's tree and she was afraid to tell me about it.

I went outside and shook the tree until it came down, thinking, HOW do these things HAPPEN?

While Boo watched embarrassed from the house, vowing to remember next time to use someone ELSE'S underwear for her retaliatory schemes....
Posted by Christie at 12:05 AM 1 comment:

What I found under my couch

No there's no photograph. I have to maintain SOME dignity here.

As Barney says, you have to Use Your Imagination.

So last night I saw a Care Bears video tape case peeking out from under the couch and I pulled it out.

(Yes. We still use videotapes. I'm an OLD mommy, remember?)

The case was covered in some kind of clear sticky ooze I could not identify, and it dripped slowly but continuously as I lifted it up.

I made a face and sighed. Further investigation was needed here. As much as I hated to do it....

I moved the couch to look at the floor beneath.

I found a large puddle of the same unidentified icky mess with several plastic toys dotting it like islands.

Also I found some dirt. And some hairballs. And dried-up spill of what appeared to be pink nail polish

I wiped up everything but the nail polish, which will require some kind of major solvent to remove, unfortunately.

Then I tried to figure out what the wet spill was, examining it closely. The puddle was clear and sticky, thicker in the middle than it was on the ends as if it were in the process of congealing, and it smelled strangely fruity. I still had no idea what it was.

Searching for further clues, I tried to figure out where it had come from. There were no open containers around, and no telltale "spill-proof" (HA!) cup near the spill. I took the couch apart to make sure there wasn't any sort of dripping bottle hidden under the cushions. I simply could not find the source of the spill either.

I shrugged and gave up, deciding to go ahead and wash the couch cover while I had it all taken apart. As I usually do, I put a quilt over the couch to protect it while the slipcover was in the washing machine. 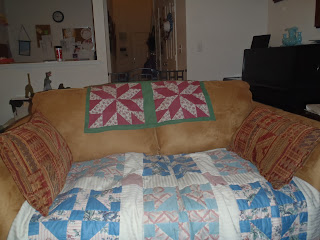 (I don't really have to say WHY the couch needs protection, do I?)

When GG saw the un-slipcovered couch, she said, "Who threw up?" That's usually why the cover gets washed.

Then my husband told me what had happened while I'd been gone that evening. Apparently ET had left a large bottle of flavored water uncapped near the twins.

I said, "AHA! The souce of the Weird Unidentified Spill is revealed!"

Let's do the math on that shall we?


(image from http://www.walmart.com)
After this ET came downstairs and saw the quilt-shrouded couch.

At least they're consisitent.
Posted by Christie at 12:02 AM 1 comment: 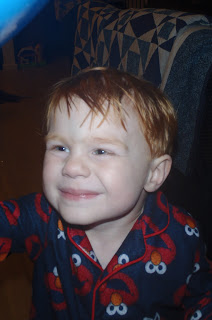 Last night I was dressing Baby Boy in his Elmo P.J.'s and I started making up a little song for him.

(This is to the tune of the "Elmo's World" theme song from Sesame Street.)

I started feeling impressed with what a creative mom I was. It's like, Oh yeah, I'm cool. Watch me, I'm the Playful Parent.

I sang, "Elmo loves his jammies, and you do too!"

I poked my little boy in the tummy and he smiled.


We geared up for the big finish to the song. Baby Boy began singing with me.

My son grinned triumphantly and replaced the last word with a loud, "POOP!" before collapsing into giggles at his own witticism. 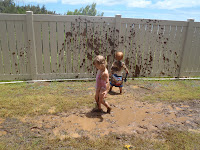 A few months ago I posted about the annoyance of the automatic sprinklers turning my backyard into a swamp.

At the time I was happy that the office had finally turned the sprinklers off, but apparently that was only a temporary reprieve.

Those suckers were right back on again in a few days, randomly spraying to their little plastic hearts' content.

It wasn't just the backyard, either, although that was definitely the most irritating place for an automatic sprinkler.

There were also sprinklers in the front: aboveground and made of PVC pipes with protruding sprinkler heads to puncture the tires of unsuspecting cars that accidentally strayed from the pavement.

But now, I have good news!

THEY FINALLY PULLED OUT ALL THE SPRINKLERS!

I saw some workmen oustide sawing the PVC pipes up and stacking them on the grass. 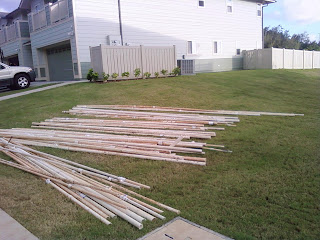 Which they left sitting out in piles.

So that later I saw a couple of neighborhood boys playing light sabers with them.

(Meaning the boys were whacking each other upside the head with lengths of PVC pipe.)

Recently I've been trying to restrain myself on Facebook from making too many snide remarks about my friends' photos.

But since I have a blog, I can make them here!

Any party is better with the Pope’s head in the middle of the table.

What really happened to Wilbur after Charlotte died.....
Posted by Christie at 12:11 AM 1 comment: 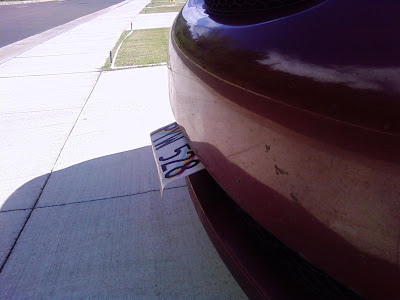 The license plate got caught in the garage door.

I'd backed the van in just far enough so the garage door would close but not open properly, apparently.

Honestly I don't know how this stuff keeps happening. I'm SUPPOSED to have a pretty decent IQ.

Chalk it up to mommy brain, I guess.
Posted by Christie at 1:00 AM 1 comment:

Okay, so the Christmas tree is finally taken down.

I put this task off every year because I hate it. Also everyone else hates it, and no one wants to help.

Here’s a photo of putting the tree up. 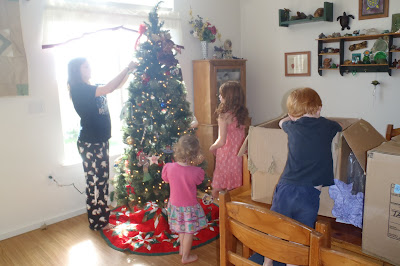 See how everyone is happy and full of family togetherness? There’s Christmas music playing, and we’re all holding up old ornaments and cheerfully saying, “Oh I remember this!”

Taking the tree down is a whole other story.

At dinner I said cheerfully, “Who wants to help Mommy take the tree down tonight?”

There was a little silence, and suddenly everyone remembered urgent errands that needed to be performed after dinner.

This year we had the added fun of calculating just how many of those nostalgic old ornaments had been broken by the twins.

Here’s a little sampling of the casualties. The ornaments that go in these boxes, including one that we’ve had since 1995, were smashed beyond repair. (A less happy reason to say, “Oh, I remember this!”) 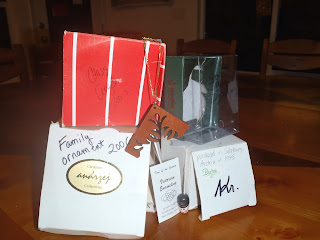 This is of course not including all the ornaments I glued back together, with varying degrees of success, and put away.

I don’t know how one pair of three-year-olds manage to break so much more in one year than the three kids before them combined over fourteen years.

My husband says the twins’ destructive potential is not just double the average toddler’s, but quadruple.

There. (You see kids? Math can still be useful!)

Anyways, the tree is put away for another year.

Now we’re left with the sad empty boringness of the room. It’s strange, because this is the very same room that looked perfectly fine a month ago before we put the tree up, and in fact we wondered where the tree was going to go, since the room was so full. But now it looks empty.

It’s like that weird old story about the guy who visited the wise man because his house was too crowded and the man said okay bring in your cow your goat your chickens etc, and then after he finally took them all out again the man felt his house was sized just right.

(If you don’t know what I’m talking about I found the book at http://us.macmillan.com)

So I should remember the lesson of this book: It could always be worse.

The twins could be triplets!
Posted by Christie at 12:18 PM No comments:

Have you seen this boy? 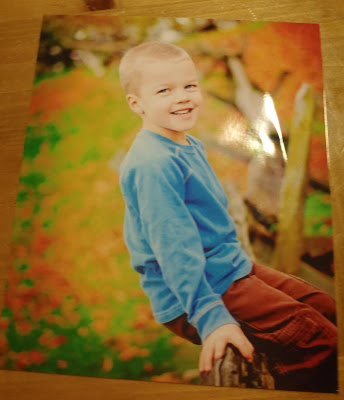 Who is this kid, you ask?

No, I asked you first!

This is a beautiful glossy 8x10 snapfish sent me, instead of the 8x10 of my own kids, which I ordered. 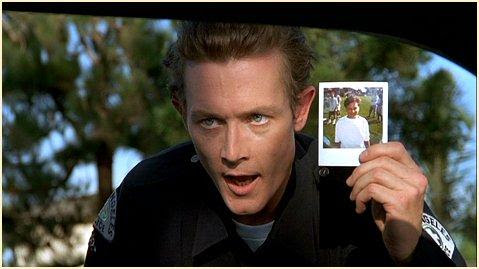 So I sent a robot cop out to find out if anyone has seen this boy.

I called snapfish and they express-sent me the right picture. So I'm happy now.

But I still don't know who this kid is.

(terminator2 image from http://www.newgrounds.com)
Posted by Christie at 5:10 PM 2 comments:

Twins in the Bathroom 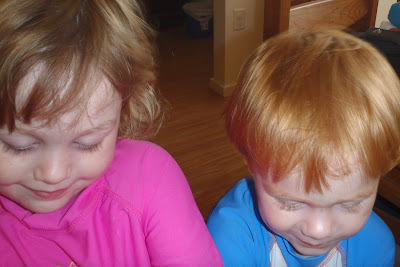 If you were inside a public restroom when I came in with my three-year-old twins, here is what you’d hear: