Gecko in the Car!

I was driving the kids to school and I heard Little Girl start yelling from the backseat, "Gecko! Gecko!"

Huh, I thought. She sees a gecko somewhere.

Then I saw it. Looking right at me.

SITTING ON MY DASHBOARD. 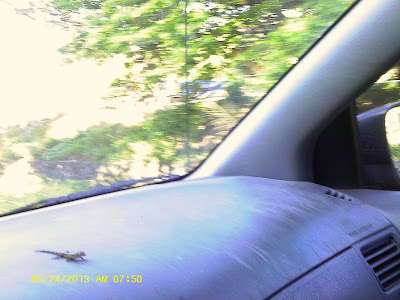 Let me just point out that I did NOT crash the car. I may deserve a medal for that.

Now, I know a gecko is not exactly a man-eating monster, but I challenge any one of you to keep your cool when one JUMPS AT YOUR FACE.

So that thing was leaping all over the car and the kids were screaming...and I just had to keep driving. Finally we got it to jump out the door when we'd stopped at the school.

I thought that was the end of it. But then later I went to the drive-thru at McDonald's.... 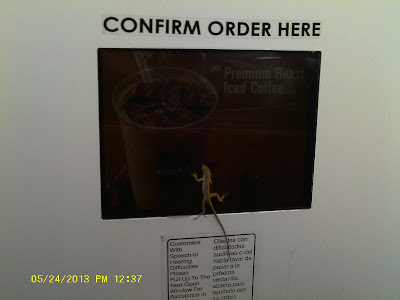 Is this thing following me?!

(As a side note, I took the top picture of the gecko in my car after my first round of screaming had subsided. Boo said, "What the heck are you DOING Mom? Are you going to put this on your BLOG?!" Really, how could I resist?)
Posted by Christie at 12:00 AM No comments:

Okay, when I posted the story about the carnival, I should have pointed out that my friend who organized it did an awesome job.

And that she asked other people to dress as clowns but they wouldn't.

And that the homeless kids had a great time and loved the carnival.

And that I'm the kind of jerk who makes jokes about charity events in my blog and then feels bad later....

Here's a photo of the whole clown outfit by the way:

There now. Didn't that make you laugh? I'm not SO much of a jerk, right?

Also, while I'm at it.... I publicly apologize to my neighbor for my stinky outside trash can. Thank you for hosing it down. You are great.

Also I'm sorry to that guy I accidentally cut off in traffic yesterday. And to that lady in church who thinks I sing too loud. And...

You can't hate this girl, can you?
Posted by Christie at 12:00 AM No comments:

Why am I the only one dressed as a clown?

My friend was organizing a carnival for kids at a homeless shelter and I volunteered to help.

(Okay, let's be honest: She called for volunteers and I pretended not to hear. She put up notices for volunteers on the internet and I did not click on the links. Then she asked me to volunteer, and I tried to change the subject, and finally agreed to help. This is because I am too lazy to willingly volunteer for anything. But didn't the first sentence sound nicer? The plain truth can often be harsh.)

Anyways, I agreed to help at the carnival, and she asked if I had anything "clownish" to wear. So I said I would come up with something.

I made a vest out of balloons and painted my face up. I don't have a full shot of the outfit but here I am in my car, cheerfully driving to the carnival: 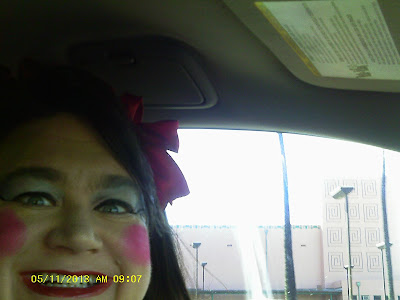 I had to park kind of far away so I ended up walking down a busy street in the clown getup. Finally I arrived at the carnival.

Lots of people were there. NONE OF THEM were dressed in anything even remotely "clownish."

I felt like Reese Witherspoon's charcter in Legally Blonde at her first Harvard party. (They told her it was a costume party and it wasn't.)

Yeah, except she looked A LOT better.

(carnival patch image from http://www.e-patchesandcrests.com)
Posted by Christie at 12:00 AM 1 comment:

The Twins Get a Haircut: A Comic 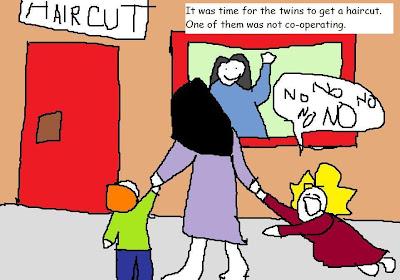 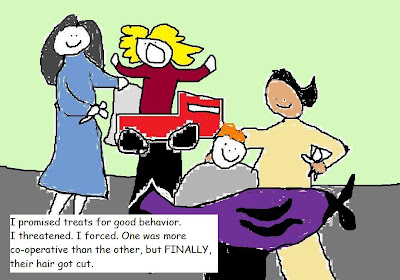 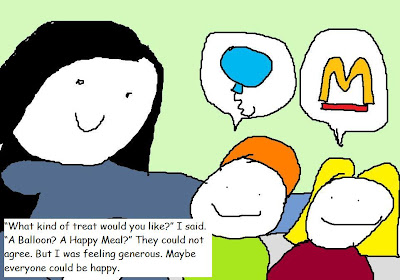 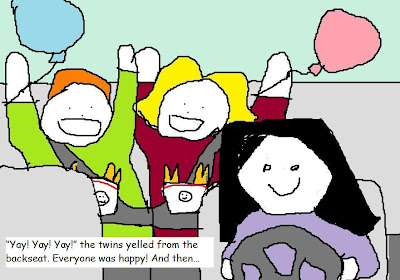 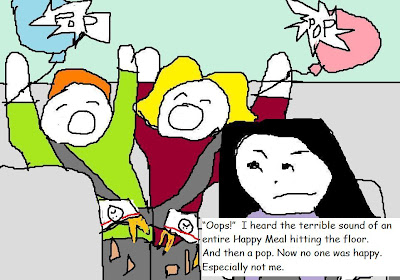 That awkward moment when...

You realize you're texting three times more often than your teenage daughters. 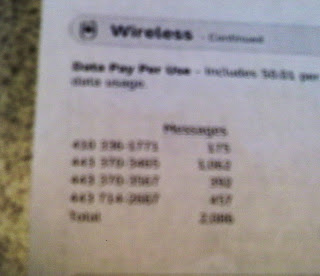 Today I'm trying my hand at cartooning. Lucky you! You get to be my test audience! 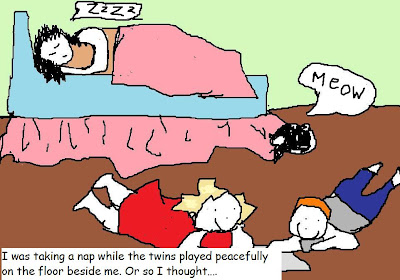 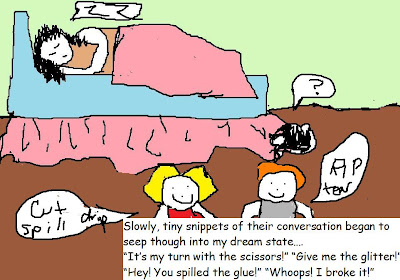 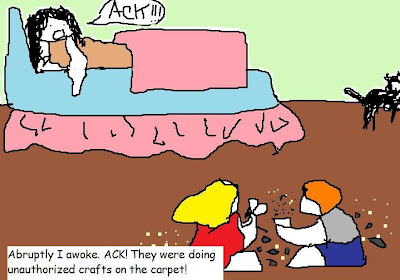 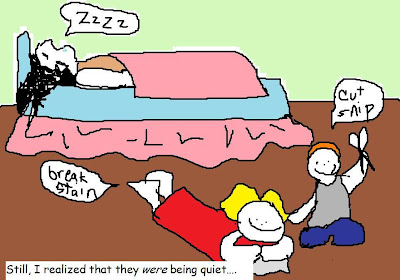 I may need to rethink this

I have developed a strategy for dealing with the embarrassing things my kid blurts out in public.

You know the kind of things I mean. You're passsing a stranger with an oddity of some type, and your child's eyes lock onto the person and he makes an observation at top volume. 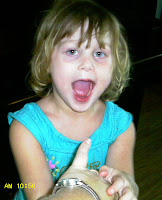 "What is that thing on that man's FACE?!"

In the past I had always had what I'd call the usual response: the Shush-and-Rush.

That is, trying to silence the child, hurrying away from the scene, and hoping the person hadn't heard.

I have learned that this does not work. The person heard, all right. Everyone in the whole store heard! And if they didn't, they sure heard it when the child repeated himself as you were dragging him away. "But why is she so FAT, Mommy? WHY?!"

So what I've started doing is addressing the remark directly, in full view of the offended party and the rest of the world.

Example: I say brightly, "Well, sweetie. Some people are fat and some people are thin. Everyone is different; that's how God made us, and it's okay."

The major advantage to the Direct-Address is that it makes the child stop repeating the inappropriate thing, because he feels listened to. And that's all he wants, is an answer to his question. Really. He's not trying to be irritating. (Usually.)

The other thing that I hope this strategy does is show the remarked-upon person that I care about their feelings and am not just allowing my child to say hurtful things with impunity. This part, unfortunately, does not always work out the way I plan.

We were at the McDonald's playground and a little boy came in who had the lower half of his arm missing. Little Girl was FASCINATED.

I put on my calm-friendly-and-bright voice. "Well, sweetie, sometimes people have one arm. Everyone is different; that's how God made us, and it's okay."

She persisted. "But Mommy! What happened to his ARM?!"

"I don't know," I said, nonplussed that she hadn't stopped yelling yet. My strategy was failing. I tried to remain matter-of-fact and said, "Maybe you could ask him."

This was a BIG mistake. She ran directly to the boy.

"WHAT HAPPENED TO YOUR ARM?!" she yelled in his face.

The boy screamed and ran away from her. (Do you blame him?) She came back to me and I told her that maybe he didn't want to talk about it. Finally she went back to play without asking more questions.

A few minutes later I saw the kid's mom grimly putting on his shoes and dragging him out of the area. He was crying. I felt horrible. Had my child and I driven him away from the playland? Obviously we'd offended the mom with our agressive directness.

Still, I'm not sure how I should have handled it.

Does anyone else have a better idea?
Posted by Christie at 12:00 AM 3 comments: