THIS BLOG HAS NOW MOVED

Return to christinakosatka.com for my current entries.

Or stay here and reminisce about my past posts:

I may need to rethink this (The One-Armed Kid)

A Short Drama (The McDonald's Playland)

Apparently my daughter insulted the governor

How my DVD collection ended up in an evidence bag

Steve Jobs, we need your help (iPhone in the Toilet)

Flying With The Perfect Couple

Pet vs. Pet, or What has the cat been up to?

What we learned this summer in pictures 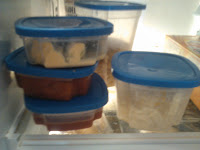 Last week we had leftovers for dinner one night.

I hate to do that, but sometimes there's just so many plastic containers in the fridge, you've got to get rid of some of them. It's just like: Open something and eat it, for crying out loud!

Anyways, that night Boo was playing outside and came in a little late.

"Well, yeah," I said. "But we were just having leftovers; there's still some you can eat."

Boo made a face. "So I get leftover leftovers?!" she said in disgust.

I guess I don't have anything to say about Miley Cyrus

I tried to have an honest dialogue with my teenage daughter on the subject of Miley's now-infamous VMA performance.

(Honestly, I had more trouble with the weird giant bears than with the whole Robin Thicke thing. Just visually speaking.)
Unfortunately I said the word "twerk." ET said to NEVER SAY THAT WORD AGAIN.
She said a mom trying to talk "cool" is like the dumb guys at school trying to speak Spanish.
"Um... Ko Mo Ez Staz, Me Um Eego." she demonstrated in a duh-voice with a bad Spanish accent.
"It just sounds wrong, Mom," she explained. "WRONG."

Update on this post:
Upon discussion with my other teenager, I have discovered that I may not actually know what "twerk" means.
Me: It's just shaking your butt, isn't it?
GG: No Mom. It's not.
Me: Yeah, like this.
GG: NO! Ew! Stop that!
Me: Well if that's wrong then you show me how to do it.
GG: No! Just Google it, Mom.
Me: I still think it's like this.
GG: ACK! Please stop! My eyes!
Posted by Christie at 12:32 AM No comments:

Thanks for the virus

My oldest daughter ET has gone away to school.

We talk on the phone a lot because mommy misses her, and she likes to tell me what she's doing. (Before school started, that was pretty much playing computer games and watching TV. Now, of course, she's much busier.)

She emailed me a link to a movie she liked so that we could discuss it. It was called "Alone," and it was in Korean with subtitles; don't ask me where she found it.

I clicked on the link and watch about 3/4 of the movie. The plot had to do with conjoined twin sisters who both loved the same man. (I'm not making this up. I swear.)

Just at the most suspenseful part, my computer froze up and I got this "blocked" screen. 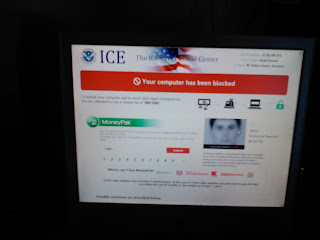 That's right! A virus. My kid sent me A VIRUS.

The screen informed me that my computer was being held hostage by terrorists, and that they would set it free for only $400.

I tried to remove the thing myself, using instructions I got from a "virus removal service." The service said to call them for help if their instructions did not work.

When I called them, the guy said my infection was "really bad," and that I would need a "virus removal expert" to get it off.

My husband pointed out that this seems really suspicious. How do we know these people didn't make the virus in the first place, and THAT'S why they are such "experts" on it?! Sounds like some kind of conspiracy plot.

Anyways, I did not pay the terrorists, or the experts. I did end up having to pay a regular guy $100 to kill the thing, and my computer was down for two weeks.

But at least I know the guy here wasn't involved in the original plot. I think...

The worst part is... I still don't know what happened with the Korean conjoined twins!
Posted by Christie at 12:40 PM No comments: 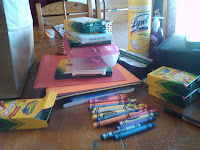 In preparation for this momentous occasion, I purchased a mountain of school supplies and was required to label it all with their names.

And I mean, they make you WRITE THE KID'S NAME ON EVERYTHING.

I don't mean just on the two notebooks, eight folders, one pencil box, two erasers, one pair of scissors, four boxes of crayons, et cetera, for each child.

I mean each individual thing. That's 96 crayons, 20 pencils, and 40 markers EACH.

But I'm not really complaining.

It's a small price to pay in order to get them into school ALL DAY LONG.

And look how happy they are about it! 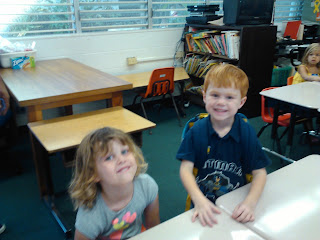 That is, they were happy until they found out they were going be in separate classes. But that's another story...﻿
Posted by Christie at 4:59 PM No comments:

I'm working on some changes for this blog.

Does that sound ominous? Sorry.

Hopefully we will be able to transfer to a format tht makes it easier to comment, follow, and such.

Playing Board Games With Preschoolers 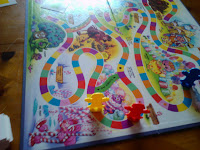 While I was playing Candy Land with the twins today, I think time slowed down.

In SUPER S-L-O-W M-O-T-I-O-N we crawled along the board with our game pieces, only to be sent back again and again.


The whole thing was further complicated by:

1) Little Boy's threats to jump to the finish line regardless of the cards' directions. (Him: "I win!" Me: "Um. You can't win while the rest of us are out of the room.")

2) Little Girl's ill-wishing of her brother. ("I hope he gets Plumpy!" "Please let him get stuck in Molasses Swamp!")

We had to reshuffle the cards THREE times. I thought the game would never end.

Little Boy paused in his gloating over winning to reassure me. "You losed, Mom! But you did good losing."
Posted by Christie at 12:00 AM 3 comments: