There was a carnival at the elementary school, so I took Boo and GG.

ET declined to go, being officially Too Cool For Elementary School Carnivals, and one of the twins was sick, so they stayed at home.

Well, as soon as we got there, GG ditched me, being officially Too Cool To Hang With Parents. My husband and I took Boo around to the various carnival things: you know, cake-walk, bean-bag-toss, et cetera.

We ended up in a long line for the hanuted house.

Can I just say that school carnival haunted houses have really changed since I was in school? I mean, all we did was hang a bunch of black paper all over a classroom and turn out the lights, then make people crawl under desks and stick their hands in a bowl of cold spaghetti, telling them it was guts.

It was lame, but it was what you expected from a school carnival. After all, what do you think you'll get for fifty cents?

This haunted house was WAY scarier. I mean, we still crawled under stuff. But then there was a guy with a knife in his mouth lurking under there.

And there were still walls hung with black. But one of them turned out to be a tarp-covered man who lumbered toward us saying, "I'm going to get you, Boo!"

That's right! The guy in the tarp KNEW BOO'S NAME!

I'm telling you, it was NOT what I expected from a school carnival. And it still only cost a dollar!

But... we didn't get to stick our hands in a bowl of peeled grapes. Bummer... 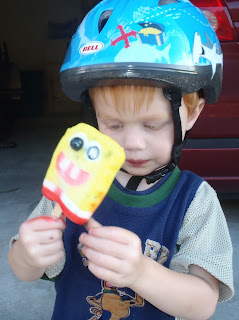 Well, it was inevitable. The twins have been introduced to The Ice Cream Man.
I guess the only surprising thing about it is that I managed to keep them away from him until age three.

I have kind of a love/hate relationship with the ice cream man anyways. As I have a strong aversion to kids begging for money every time they hear a tinkly little song, the whole concept kind of irritates me.

My own mother found the ice cream man problematic as well, since she had actually seen a kid get hit by a car while running for the ice cream truck once. (The kid wasn't killed, fortunately, but it was frightening to witness.) As a result, I was never allowed ice cream at all as a child.

Until a well-meaning neighbor introduced me to the lovely sweet cold stuff. Mmmm...

Anyways, my older kids are allowed to buy from the ice cream man but they are required to use their own money in order to avoid the whole begging thing. But until now, the twins have missed out.

Due to the fact that I never explained the whole "ice cream man" concept to them, of course.

But this weekend the twins happened to be outside riding their tricycles when the ice cream truck came on the street.

Believe me, there was NO way to hide the ice cream truck from the twins once they saw every kid in the neighborhood clustering eagerly around it. 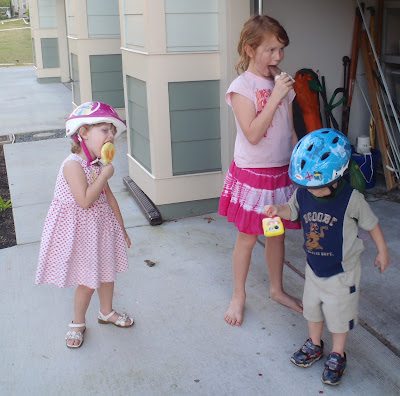 So we got ice cream bars. They were so excited; they're STILL talking about it.

As I mentioned before, there’s a swamp in my backyard.

Or you could call it a mud pit. 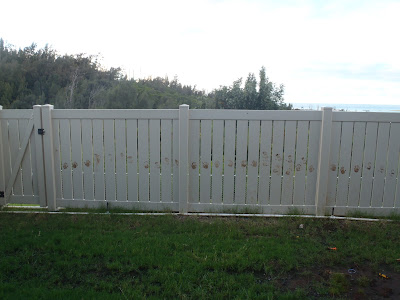 Here’s a photo of the muddy handprints the twins decorated our fence with.

When THEIR FATHER was watching them, may I point out.

Although some trouble may have happened when I was watching them too... 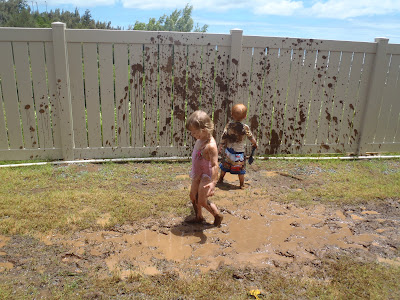 Turns out it wasn't the BEST idea to let them play in the mud.....

It’s getting better though, mostly because one of the neighbors managed to convince the landscaping people to turn off the automatic sprinklers back there.

They really were not needed anyways, since it has rained enough recently. The sprinklers are only there because of the new construction here; they wanted to jump-start the grass growing.

It was really irritating though, because we had no control over the sprinklers. Like, we’d be sitting in our own backyard watching the kids play, and suddenly the sprinklers would come on.

Oh. Great. Now we’re drenched. And it’s not even raining!

The sprinkler situation got so bad that methods of sabotage were considered. I won’t reveal the exact plans…but chewing gum was involved.

But anyways, the yard is getting better now that we only have Mother Nature watering it.

Have you ever heard of freecycle? It’s a website where you can give stuff away to people, or pick up free things from others who want to get rid of stuff. It's like a garage sale that's free. Cool, huh?

I used to belong to a local group when we lived in Maryland a few years ago, and sometimes got some nice things. Plus it’s good to be able to give something you don’t need to someone who does need it.

Since we moved to Hawaii I hadn’t gotten back on freecycle, but recently I had some things to get rid of and decided to join a group here.

Let me just give you some examples of stuff folks are offering to give away today (and this is just TODAY, by the way!):

OFFER: Various items:
All of this stuff has been sitting in a box untouched for over a year, and my cats made it their bed, so all of this stuff has dust and cat hair on it to varying degrees, depending on where it was in the pile. But, you can wash it off.
-A tiny black nylon handbag that says "be unique, be beautiful, be you" on it.
-Unused dental kit for a dog
-A photography book of signs by Walker Evans called "Signs"
-A healthy eating cook book
-Free the Jena 6 T-shirt
-Pacific Alliance to Stop Slavery T-shirt
-A movie poster for the movie "Good Hair"

(WOW. Sounds awesome, doesn’t it? Exactly HOW I’m supposed to wash a year’s worth of cat hair off a MOVIE POSTER I can’t imagine!)

OFFER: Crappy parts of Male Vampire costume. I offered this before, but never heard back from the person who wanted it. it consists of a cheap wig, and medallion to wear around your neck. It's from Walmart.

(Don’t try to sell it so much there honey.)

OFFER: A black money belt that I just bought recently. I tried it out with a single dollar bill, and not only was that all that will fit in it, but it was hard to get out, and ended up tearing...so use at your own risk. It makes a fine normal belt though.

(Again with the extreme sales skills. It just sounds SO tempting…)

(Wonder why she wants to get rid of the whole kitten-producing apparatus?)

OFFER: HP Photosmart C4280 All-in-one printer, scanner, copier
No ink or power cord or installation disc. Worked the last time we used it, about 6 months ago, then we ran out of ink, & my rabbit chewed through the power cord.

(This whole thing is looking like a warning against having pets…)

And, finally, my favorite item…..

OFFER: EXTREMELY dirty towel. This was my cat's favorite sleeping spot for a year, so it has just tons of cat hair on it.

I guess you can’t expect much for free, huh?

Steve Jobs, We Need Your Help!

ET dropped her iPhone in the toilet.

How’s THAT for an opening line?

Anyways, the way I discovered that this had happened was...

ET (my 15-year-old) was rummaging in the kitchen pantry and came out with a giant bag of rice.


Me: Are you hungry?
ET: No.
Me: Then what are you doing with that rice?
ET: I dropped my phone in the toilet.

Now this might seem a non sequitur to some mothers, but, tech-savvy mom that I am, I understood. She wanted to immerse her wet cell phone in rice in order to dry it out.

So I helped her put some rice in a baggie and asked if she’d taken the phone apart.

Here’s where we hit a big snag: Taking an iPhone apart is apparently like dismantling a bomb.

I ended up looking for the answer online and found some instructions on wikihow.

Unfortunately, the instructions were about twenty-five steps long and involved several tools, one of which I’d never heard of.

What on earth is a spudger?

It turns out this is a tool specifically for prying open iPhones or iPods. Oh, and it costs $20.99.

What, I can’t use a butter knife?

Long story short, we ended up putting the iPhone into the bag of rice intact and hoping for the best.

I guess she might have been due for an upgrade anyway…

(above image from vpnchoice.com)
Posted by Christie at 9:01 PM 1 comment:

Girl Who Can Catch Fly With Fingers

Looking over some of my recent posts, I seem to have a bug theme going on right now.

I guess that's what happens when you live on a tropical island...

We've had a lot of trouble with flies recently, as you might have noticed from my post "Flies: Nature's Cockiest Insect." They've been darting in from the backyard swamp (more on that later!) and flying around the house in a most irritating fashion.

The twins found it wildly entertaining to watch Mommy run around like a crazy person with a rolled-up magazine swatting futilely at the air. After I explained I was trying to kill a fly, they began pointing the fly out whenever they could find it.

(They think they're on an episode of "Dora the Explorer" half the time. "There it is, Mommy!" "Over there! Get it!" I half expect that little blue arrow to come over and beep-click on the fly.)

Anyways, the twins have grasped the idea that flies are bad and we want them DEAD. It warms the heart, doesn't it?

But I was amazed when Baby Girl came to me the other day and informed me she'd killed a fly herself. She held up her tiny hand, thumb and forefinger clasped as if she'd trapped something.

I chuckled to myself, thinking it was cute that she thought she'd caught a fly between her little fingers. What did she think this was, the original "Karate Kid" movie?

(Remember when Pat Morita told Ralph Macchio, "Man who can catch fly with chopsticks can accomplish anything?" Don't you remember? Anyone?! Oh, come ON! I'm not THAT old!)

Then I took a closer look, and she actually did have a fly trapped between her fingers! She had caught fly with chopsticks!

I guess Baby Girl can accomplish anything!

(above "Bug's Life" image from dan-dare.com)
Posted by Christie at 1:16 AM No comments: