When you have little kids, you have to put up with lots of gross stuff.

I just happen to have a couple of fun examples from the past week.

And, no, these are NOT about poop. Check out one of last month's posts for that story.

(My husband said, "He's got a sister on either side of him, and he doesn't know where to wipe a booger?')

I walked out to the park down the street with the twins and they ran ahead of me.

Actually I was delayed by Boo yelling out the window at me, "What's nine times eight?" and me yelling back, "I'm NOT giving you the answers to your homework problems!"

(Translation: Mommy is not actually sure what nine times eight is.)

Anyways, by the time I got to the park the twins were happily munching pretzels. As were the other four or five neighborhood kids there.

I asked, "Where did you get the pretzels?"

The twins indicated one of the neighbor kids around their own age. "M gave them to us."

I said, "Oh! You should tell M thank you for sharing her pretzels!"

M said, "They're not my pretzels."

I said, "Then whose are they?"

"I dunno. I found them on the ground," M said matter-of-factly, and then walked away, still chewing her own pretzel.

Ewwwww.
Posted by Christie at 1:55 AM No comments: 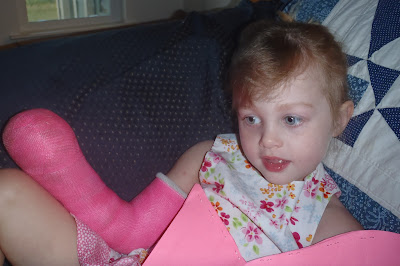 Baby Girl has a new cast on her arm.

Why, you ask? Because, apparently, her mother is an idiot.

That's right! I (the idiot) thought it would be okay to let a three-year-old play in six inches of water as long as her cast was wrapped in two plastic bags and some scotch tape.

I had to take her back to the doctor and get them to put a new cast on.

She actually left wet cast-prints on the paper liner of the examining table. I'm serious. That's how wet her cast got from six inches of water, through two layers of plastic.

The doctor gave me a look of serious disapproval when he saw my child's dampened armprints on the paper. I could hear him thinking, "How did that cast get so wet? This woman is an idiot. "

Well, I got my payback when Baby Girl got a look at the electric saw they use for cast removal.

The noise was terrible! And I don't mean the saw; I mean the KID! It took at good half-hour or more to get that soggy cast off her, and she screamed in terror the whole time.

Not a fun day, for Baby Girl, or Mommy. We were both exhausted after that.

The weird thing is, she perked right up when she got to choose the new pink cast, and once her arm was safely enclosed again.

I'm dreading the next time this thing has to come off though.

Sorry if this makes me sound horrible, but I'm always glad to send the kids back to school.

Especially after one of them ended up in the emergency room over the break.

But I realize some people aren't ready for the holiday to end.

At the elementary school on Monday I was in the office for PTSO business. I saw a child had signed in on the "late" log at 9:05 a.m.

Under "reason for being late," she put, "Finishing our vacation."

I guess she needed that extra hour of Spring Break.

(image from http://www.cardsandstuff.co.uk/)
Posted by Christie at 5:55 PM 1 comment:

Baby Girl's Accident, OR How to Turn an Injury Into an Advantage

Baby Girl had a little mishap with the closet door.

As in, her brother slammed it on her finger AND SNAPPED THE END OFF IT.

I won’t take you through the bleeding and the screaming, or the ER trip and the seemingly interminable wait to see a doctor.

Long story short: Baby Girl has lost the top of her right ring finger (about half of the top joint) and her whole arm is in a cast.

(Her whole arm is encased so she’s less likely to try to rip the cast off. Yes, it’s like putting a cone on a dog’s head. Come to think of it, treating preschoolers IS kind of like treating dogs, I guess.)

While we were at the hospital a Nice Lady came to see Baby Girl.

They called her a Child Life Consultant, but she appears to be a professional Nice Lady.

She brought in two new toys for Baby Girl to choose from. She said they are donated from the Disney corporation for kids at military hospitals.

I know, right? Kudos to you, Disney! You’re not as soul-less as they say!

So the Nice Lady said Baby Girl could choose Jasmine or Cinderella.

This was a difficult decision.

Finally Baby Girl chose Jasmine and the Nice Lady opened the packaging. This is probably the hardest part of being the Nice Lady, since the factory packages dolls as if they are expecting the toys to have to survive the apocalypse.

After that the Nice Lady asked us about our feelings, and if we needed help, et cetera.

I said we were fine and didn’t need anything right then.

We chatted a few minutes and then the Nice Lady asked Baby Girl if she needed anything else.

Baby Girl pointed at the other toy. “Cinderella,” she said.

I laughed. “You asked!” I reminded the Nice Lady.

By the way, she only got to keep Jasmine. It was only one finger, after all.
Posted by Christie at 8:38 PM 3 comments:

So I started hearing about pinterest.com a few months ago from one of my Cool Friends.

(I'm not cool myself, but I DO have a few Cool Friends.)

I ignored it for a while, but it seemed like EVERYONE was talking about it, so I decided to check it out.

When I went on it, though, the website said you had to be INVITED to join.

I’ve got to 'request an invitation?' And then get on a WAITING LIST?

What am I, rushing a sorority?

It’s like they’re selling snobbery! I’m offended by this."

But I requested an invitation anyways of course. Because I'm so desperate to be Cool.

And actually, it turned out to be not that difficult to acquire an invitation after all. Pinterest is not as exclusive as it would like to appear. 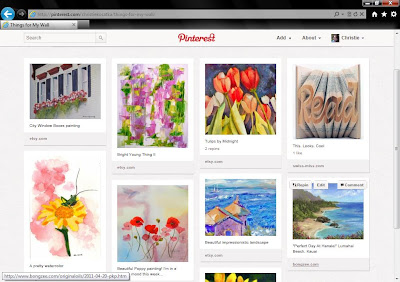 The only problem is, now I'm getting distracted by the computer even worse than I was when it was only facebook and e-mail to distract me.

I keep leaving things half-finished like some kind of ADD freak.

Here's photographic evidence: I started transferring laundry from washer to dryer, and then apparently got bored and wandered away. Then I got sucked in by pinterest. And I didn't even realize I'd done it!! 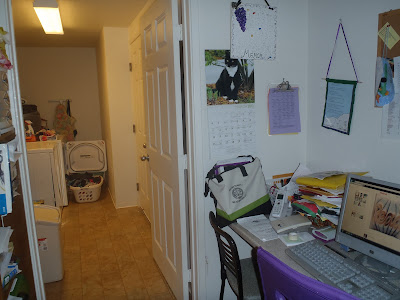 The other day a maintenance man came to our house to repar something, and he said he'd do a safety inspection while he was here.

So he checked the smoke alarm and fire extinguisher, and cleaned the air filters, and then he asked me if we'd had safety sickers installed on our upstairs windows.

I didn't know what he meant, so he showed them to me. 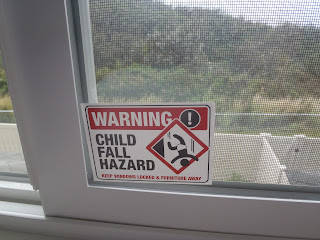 It's a good thing he installed those safety stickers right away.

That will keep those kids from falling out of the window.
Posted by Christie at 2:44 PM 1 comment: