November first is traditionally Pumpkin Smashing Day around here. We usually carve the pumpkin around the 29th or 30th of October, and then smash it right after Halloween so the pumpkin doesn’t have a chance to get rotten.


Here’s Official Pumpkin Smashing Day 2004, when Boo was a toddler. 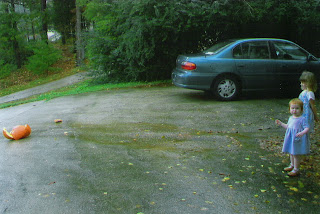 Apparently, prompt pumpkin disposal is even more important when you’re celebrating Halloween on a tropical island, as we recently discovered.

Last year we weren’t able to carve a pumpkin. There seemed to be some sort of pumpkin shortage on the island; I didn’t buy a pumpkin the MINUTE I saw them for sale --it was around October 15th or so, and it seemed too early-- but they were all gone by the 25th when I went pumpkin shopping.

We ended up carving a pineapple. I’m not kidding.

This year I bought three pumpkins on the 15th of October. 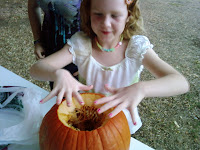 We attending a group pumpkin carving held at our church a week before Halloween. We had a nice time carving with everyone else, and I saved one pumpkin intact at home for later carving, figuring the two that we carved a week early would shrivel up before Halloween came around. 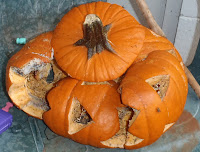 I was not wrong on that.

But I hadn’t counted on the effects of a tropical environment on a carved pumpkin.

After only a couple of days, when the pumpkin had started to rot. I looked at it, took a picture, and then forgot about it.

The next day, it looked a LOT worse. (No picture of this. In fact, if you're squeamish, just skip the rest of this story.)

I went to throw it away. I got a plastic bag to pick it up with, figuring it would be a little yucky.

It was a LOT yucky. The top part went up with the plastic bag in my hands, but the bottom dropped off onto the porch with an oozy plop. It was teeming with bugs, almost more black than orange. As I watched in horror, a single roach, a good two inches long, struggled out of the pile of slime, crept over the smaller bugs, and crawled to the top.

And I still had to get this mess off of my porch!

Next year we’re waiting until the morning of the 31st to carve the pumpkin.
Posted by Christie at 6:44 PM