Is There a Special Virus for Redheads?

So, we’ve got two sickies in the house right now.
And both of them have red hair.
Yesterday, Baby Boy wasn’t interested in eating much. Even when there was cake and ice cream. (We were at a birthday party.)
Then when we got home in the evening he threw up in the kitchen.
This resulted in the flurry of activity that always happens when a toddler throws up: trying to get the kid and the area cleaned up before he/she makes it worse by walking through the puddle, and without getting too much vomit on anyone else.
These problems are compounded when you have twins: that means there’s automatically another toddler ready to tramp through the mess, smear it around, and/or drop toys in it.
Also Baby Boy was crying hysterically because he’s still too little to understand why his stomach is involuntarily throwing its contents out. It’s a little scary when you’re two years old. 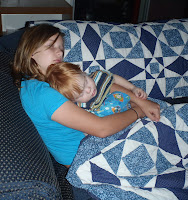 Anyways, as soon as we got him cleaned up the other kids started up with the, “My stomach hurts too.”
Hmmm. Sunday evening tummy aches. Could this feeling of illness have anything to do with the imminent threat of school Monday morning?
But I guess it turns out one of them actually meant it, because after the girls were in bed, GG called from the bedroom, “Boo’s barfing!”
Both of them seem to be better today, but it does seem odd that the illness only struck those two kids, out of the five.
Is it the Curse of the Red-headed Virus?

Could be. Those two do share an uncommon bond. 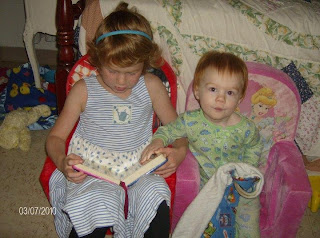 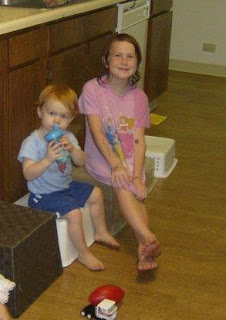 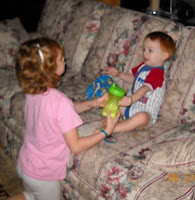