It’s not an easy thing, being a pet in our house. Apparently it’s kill or be killed around here sometimes.

When I wrote about our kitty eating one of the mice the other day, I forgot to mention that we had a fish too.

It’s not too difficult to forget about fish. As I’ve said before, they’re The Most Boring Pets on Earth.

We have a fish because one of our neighbors moved and couldn’t take their fish along, so the kids begged until I agreed we would keep it.

This is not the first time this has happened to us. A few years ago we ended up taking a whole tank full of fish from a neighbor who was moving away.

That time, however, I feel I was ambushed. The conversation went like this:

By the way, the kids were present for this conversation, so just imagine them in the background like a Greek chorus, chanting, “The FISH, the FISH, we’re going to get the FISH!”

Now, in my neighbor’s defense, I guess it’s possible that I HAD agreed to take the fish and was subsequently (a) hit over the head with something large and heavy, or (b) abducted by aliens and had my memory wiped. Or that I just had a case of “mommy brain” and genuinely forgot.

But I don’t think so.

I kind of think I was ambushed.

But anyways, the kids were excited about the fish, so we got them. It turned out they were Betta fish, the kind that you’re supposed to keep separated or they’ll kill each other.

You’ve seen these things in the pet store, right? A whole shelf full of tiny bowls with one solitary fish floating in each one, like fish isolation chambers. It’s a little creepy, isn’t it?

The pet store guy had told me that if you put two Betta fish together they would fight until one of them was dead. Like that movie, The Highlander. Remember, “There can be only ONE!”

But this tank had six or ten of the little buggers all together.

My neighbor said it was okay, that they never fought because there was only one male and the rest were females. Which made sense in a way.

Once they got to my house, however, it was a different story.

Maybe it was the trauma of having their tank moved, or maybe my house really IS a dangerous place for pets, but that single male suddenly went on the attack. He was like, “I don’t care if you ARE a bunch of girls. You’re going DOWN!”

One by one the fish started dying. I never saw any actual fighting, but every once in a while you’d see one of the fish swimming around with half a fin torn off.

And there was the one who cowered next to the filter all the time, perhaps trying to work up the courage to make a break for it, Finding Nemo style. All drains lead to the ocean, right?

Eventually only the male was left. And I guess he liked it that way.

But back to the current fish, the one a neighbor here in Hawaii bequeathed to us.

The fish is named Angel, by the way, although it hardly matters. I don’t think any animal care LESS what name a human gives it than a fish.

Anyways, I’d been noticing recently that Kitty has been showing a lot of interest in the fish bowl. Not really a good sign for our little friend Angel I think. Remember what happened when he took a shine to the mouse cage…

(If you've forgotten what happened a little while ago in the cat versus mouse game, click HERE.)

You can probably guess where this story is going by now, right?

Today the kids asked me where the fish was. Apparently, his bowl was in its regular place on the counter, but Angel was nowhere to be found.

As best we can tell, Kitty strikes again.

There can be only ONE! 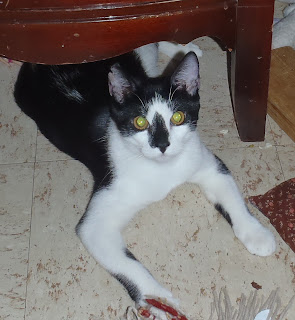