There Are Centipedes in Paradise 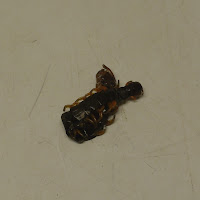 I found a curled-up centipede in the dryer.
Fortunately, it was dead. They are hard to kill; you have to really beat them to death, or preferably cut them in half. Ewww.
They have the nastiest centipedes here in Hawaii; it‘s a form of the Vietnamese centipede. They are disgusting to look at, and also poisonous.

Fortunately, their bite won’t actually KILL you. It will just make you swell up and hurt a lot. So that’s some consolation, right?

Here’s a photo from another Hawaiian blogger who has an interesting centipede story as well. That is seriously gross-looking, right?

According to Wikipedia these things are actually sold elsewhere as “terrarium animals,” but I can’t IMAGINE a less appealing pet.

So far I haven’t had any of these nasty things inside the house, although we’ve killed several outside the door.

And my daughter’s friend had one in her BED. Ewww!

But anyways, Dryer Centipede is the closest we’ve had to one inside, so I think we’re pretty lucky.

Unfortunately, I mentioned the dead centipede in the dryer to the kids and they freaked out, asking if I re-washed the clothes afterwards, and if not, exactly WHICH load of clothes was it, et cetera. (Obviously THAT information was not disclosed.)

So now they are all concerned that there are “centipede germs” on their clothes.

But WHICH clothes? I’ll never tell…
Posted by Christie at 1:56 PM