Elf on the Shelf

So all my friends with small children are doing this "elf on the shelf" thing this Christmas.


In case you aren't familiar with the Elf, here's the description from Barnes and Noble, one of the many retailers selling it:


"Every year, Santa sends a scout elf to each home to report on whether its little boys and girls have been naughty or nice. With this tradition-in-a-box activity kit, families will be able to search each day for Santa's secret helper. A game that builds anticipation for Christmas."


So the idea is, you buy the book (elf included!) and explain to the kids that the elf is watching them and reporting on their behavior to Santa. Then you place the elf somewhere in the house so that it can observe the children. During the night you move it to another location, so they can see that the Elf has been off to the North Pole for debriefing while they were asleep.


Does no one but me find this whole idea just a little creepy?


I mean, it's bad enough that Santa "sees you when you're sleeping" and "knows when you're awake," but now he's placed a MOLE in your HOUSE?!


Now I do get the fun of the kids finding where the elf is hiding every day and all that.


And to be completely honest, the creepy-stalker-ish-ness of the lyrics to "Santa Claus is Coming to Town" never dawned on me at all as a child. I was as excited about Santa coming as the next kid.


But, from an adult perspective, that Elf on the Shelf just FREAKS ME OUT. I want to throw a towel over him when I go to my friends' houses. 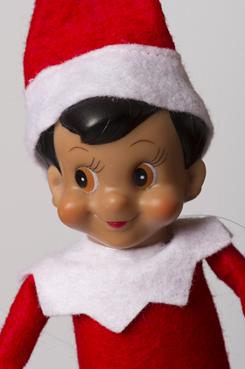 (image from http://usatoday30.usatoday.com)
Posted by Christie at 12:23 AM