This week we played another round of that exciting game, "What the heck is that horrible smell?!"

This time we noticed a certain distasteful odor in the garage Sunday morning. We weren't sure of the origin, although a gas leak or sewer seepage were mentioned as possibilities.

By Sunday evening it was really bad. My husband came into the garage, sniffed the air, and said, "That's a dead thing." Then he left.

We looked around but the dead thing could not be located on first glance. I knew a full search would have to be performed on Monday.

I left the windows up in the van for the night to keep the smell from invading the car, and I hung a new air freshener from the rearview mirror.

Monday morning GG went into the garage to get something before school, and she immediately came back. "I don't really need it," she gasped, covering her mouth and nose and shutting the door quickly.

I opened the outside door to try to air things out, but the stink in the garage was still horrendous. We held our collective breaths as we ran to the van and shut the doors.

Inside the car the scent of Perfectly Pomegranate battled valiantly with the the stench of Dead Thing. The air was bearable, but only just.

It was imperative to that we find out the source of this bad smell, but I felt weary at the very thought of moving everything stored in the garage to try to find the horror that might lurk behind all those boxes.

ET said I should hire an exterminator. "I'll bet if you gave some guy a hundred bucks he'd find the dead thing."

I looked at her. "I'll give you fifty to find it."

"Done!" she said, a little too quickly. I probably should have low-balled her a bit more.

When we got home I parked the van outside and left the door open. ET began moving things out of the garage piece by piece.

Then she stood still and thought. She knew it would be smarter to try and find the source of the smell, but somehow it seemed to be coming from everywhere at once. Then she saw a few flies buzzing around and she had a thought.

Or maybe it was Yoda who said it. (Although wouldn't he have said "The flies you follow"?)

Anyways, she realized that the flies would go directly to the dead thing. So she waited, and the cloud of flies gathered and formed and hovered around....

THE VAN!!!  Under which she saw few flies darting around a couple of gray feathers.

"Eureka!" said ET, and she came to me. In her best elementary-my-dear-Watson-style, she triumphantly informed me of her conclusion:

"Mother! I have deduced that the dead thing is a bird, and that it is under the hood of your car! You owe me fifty bucks!"

With extreme trepidation, I pressed the button and popped the hood. 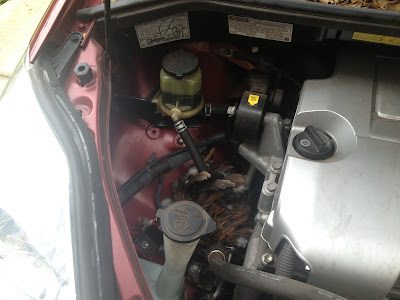 "Now how am I going to get that thing out of there?" I wondered aloud.

ET shrugged. "That would cost you another fifty," she said, and went into the house.
Posted by Christie at 12:00 AM