Pet vs. Pet, or What Has the Cat Been Up To? 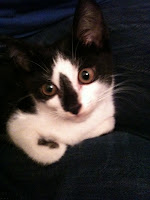 You may have been wondering about our cat.

Remember the injured kitten ET rescued and saddled with the improbable name of “Bunny” back in May?

(By the way, I discovered that she chose the name because the car that she saw hit the kitten was covered in bunny bumper stickers. That’s just a LITTLE sick, don’t you think?)

At first he spent most of his time hiding from us, and even now he’s definitely more skittish than the average cat. It’s like he really wants to be petted, but he’s also terrified of it. He’s a very conflicted animal.

We usually just call him “Kitty” now, as I think almost every cat owner ends up doing. In my experience, most cats refuse to learn their names but can always be summoned with a call of, “Here kitty, kitty!”

However, Kitty is not our only pet. Last January, at the end of a way-too-long Christmas break, a bunch of whining and begging kids hit me when my resistance was low and we ended up with some pet mice. 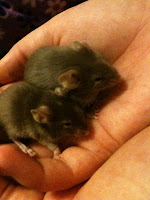 Just to show you how beaten-down I was at that point, I actually let them buy a mother and father mouse along with their litter of three babies.

As my husband said at the time, “What was Mommy smoking?”

Let the record show he didn’t say anything until AFTER the mouse purchase had gone through, even though I asked him repeatedly what he thought about the Mouse Acquisition Plan.

But anyways, the day after we bought the mice, we held a Mouse Inspection and Forcible Segregation of the Sexes, putting the two girl mice in one cage and the three boy mice in the other.

All seemed well in the Ladies’ Cage, but apparently the Men’s Cage was a tougher environment. My daughters reported that Daddy Mouse was forcing his offspring (Cinnamon and Ginger by name) into a subservient role, making them wait in the corner when the food dish was filled until he’d eaten his fill. Only when Daddy Mouse had gone into his little tube home were the boys allowed to come out and eat. There were also some unconfirmed reports of defecation abuse. Rodents can be so cruel.

I guess this was difficult for any red-blooded mouse to tolerate. So one day, Cinnamon decided to make a break for it, squeezing through the bars and heading for freedom.

That’s right, our mouse escaped from his cage. (I know this is a shocker here; whoever hears about pet rodents escaping confinement? That’s sarcasm if you weren’t aware.)

He didn’t come back. We can only hope Cinnamon found his own mouse group to dominate outside somewhere.

In any case, now that we knew the mice could get out, some cage adjustments were necessary. We purchased glass aquariums with locking plastic lids, and all was well in the mouse kingdoms.

And then we added a cat to the house.

I think maybe you can see where this story is going.

Kitty was fascinated by the mouse cages. He’d sit on the desk next to the glass box in GG and Boo’s room for hours, just watching the mice.

And finally, last week, his moment came. SOMEONE forgot to lock the lid onto the cage after feeding the mice.

We woke up one morning to scene that looked like “Stuart Little” meets “The Godfather:” There was half a mouse artfully arranged in the center of the couch.

Actually though, I think Kitty was pretty proud of himself, and he just wanted to show us how clever he was. He’s a natural predator; you can’t really blame him.

But now, Ginger is gone. Daddy Mouse lives alone. All the food is his own, but there’s no one to push around anymore either. It’s sad. I guess.

An uneasy truce exists between the pets of the house.

And a heavy object sits on top of the mouse cage, holding down the lid.