I think I’ve just heard the tolling of the death knell for naptime.
It’s called The Introduction of the Big Kid Bed. 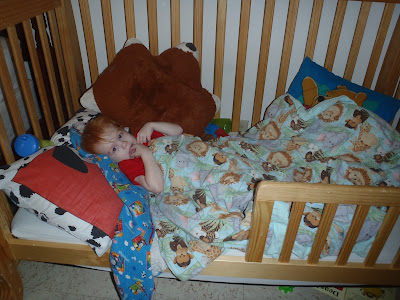 I’ve been dreading it.

I’ve seen this before. First the kid learns how to get out of his/her crib. Then you say to yourself, “Well, I suppose it’s time for the Transition to the Big Kid Bed.”

And THEN you spend every bedtime and naptime forcing the child to remain in his/her bed. Until you finally give up on naptime and just settle for making the kid sleep at night, which is definitely NON negotiable.

Well, let me just say, the whole thing is much worse with twins, which is why I tried to stave it off as long as possible with the crib tents.

But now that Baby Boy has figured out how to tunnel out of his crib tent and roam freely about the bedroom….well, we can’t put it off any longer.

He’s in The Big Kid Bed.